If you are travelling with checked baggage, do not forget to drop it off at the check-in desk associated with your flight. Then proceed towards security control, which is located on the second floor of the Departures terminal. You can reach it by the escalators located in the central part of the building. In case of any questions, please go to Information, where we will be pleased to help you with any inquiries.

At security control, do the following:

From the 1st September 2015 extended EU Commission regulations on security with regard to the control of explosives will come into force at European airports and hence also at Bratislava Airport.

When going through the regular security check, some passengers will, in addition, be swiped by special samplers on hand luggage, on wearing, on belts, on hands or on other stuff. Those samplers will be checked again. A taking samplers have no inffluence on passengers health.

On the monitors located in the waiting area, make sure you check the departure gate corresponding to your destination and airline, as a late arrival at the gate might be a reason to exclude you from the flight (in accordance with the Conditions of Carriage of the given airline) without the right to compensation.

Passengers are expected to always behave politely at the airport and to obey instructions given by the check-in and security control personnel, as well as other parties during the check-in process; aggression in a passenger is considered to be a potential threat to the safety of the flight and the passenger could be removed from the flight as a consequence of such behaviour. Passengers, who show signs of being under the influence of drink or drugs, either during the check-in process or later when boarding the plane, might be considered to pose a risk to safety due to the gradually increasing effect of alcohol and other drugs during flight and could be excluded from the flight. The most common causes of intoxication is intoxication by alcohol, followed by intoxication by the so-called ‘soft drugs’. 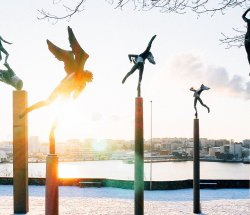