Bratislava Airport is the biggest international airport of the Slovak Republic. It is located 9 km from the city centre, belongs to Bratislava-Ruzinov. Bratislava airport handled in the past approximately 2 millions passengers yearly, handled approximately 26 000 tones of cargo and 27 000 aircraft movements. However, during covid-19 pandemic, the figures has changed.

The history goes back into 1947-48 when the airport construction began. Regular air traffic operation was launched in 1951.

The runway system of the Airport consists of two perpendicular take-off and landing runways and taxiways, which facilitate the landing and movement for all aircraft – from the smallest, single-engine types to aeroplanes of the Boeing type. Runway 13-31 is the main runway and it is 3 190 m long and 45 m wide. It is equipped with lighting and navigation devices for an exact approach under the conditions of Category III A of the ICAO standard atmosphere.

Runway 04-22 is 2 900 m long and 60 m wide. It is equipped with lighting and radio-navigation devices for an exact approach under the conditions listed in Category I of the ICAO standard atmosphere. Both runways have cement-concrete surface. There are 42 clearly marked stands in the apron area, which covers approximately 143 000 m2.

Thanks to its capacity and technological equipment, the airport is on par with the common European standard.

Aside from the said terminals, the Airport is also home to the General Aviation Terminal (GAT), where passengers on private, business and VIP flights are handled, as well as passengers of emergency flights and crew.

Passengers can choose from 29 checkin desks located on the ground floor of the departures terminal, one of them designated for oversized baggage.

In the non-public zones of the waiting area targeted at departing passengers, there are 13 gates, 8 in the Schengen and 5 in the non-Schengen area. 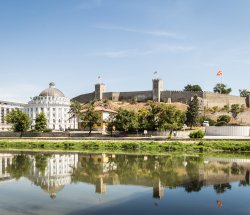