History of the project

The project of building and reconstruction of the passenger terminal building, which was launched on December 16, 2008 by a symbolic tapping of the foundation stone, had been in the making for several years.

The original departures terminal was built in 1970; however, the first proposal for its further enlargement was already in place as early as in 1976.

However, it was only in 2003 that the management of the airport started to seriously consider this issue, after the onset of large-scale development of air transport in Slovakia, when passenger numbers began to soar. In 2004, the first version of the project was initiated, which, albeit in a significantly modified form, is being realised today.

At the end of 2004 and beginning of 2005, the initial parameters for the new projects were altered significantly. After Slovakia’s accession to the EU, the country’s preparation for the Schengen zone integration started, which included the new requirement to separate the flow of Schengen and non-Schengen passengers at Departures and Arrivals.

The airport thus put its modernisation projects on hold, in particular the plans for the main departures hall and concentrated on the speedy building of infrastructure, which would comply with the Schengen requirements.

This mainly concerned the construction of the Arrivals terminal C (opened for use in June 2006), which ensured the separation of Schengen and non-Schengen passengers at arrival. At the same time, a proposal was put forward for the relocation of the passport control in a manner, which would allow the creation of a section without a passport control in the Departures hall for passengers travelling within the Schengen area from the moment of official opening of the air borders, as well as for a section with passport control for passengers travelling outside of the Schengen zone.

The building adjustments required by Slovakia’s entry into Schengen were also used by the airport to introduce some planning changes, which increased the hourly capacity of the building, and consequently contributed significantly to the greater comfort of the ever-increasing numbers of handled passengers in the interim period until the full reconstruction of the building was finished.

Apart from the necessary adjustments to comply with the Schengen criteria, deliberations about the complete reconstruction and modernisation of the passenger terminal were also influenced by the planned privatisation of the airport, which culminated at the end of 2005/2006. According to the original expectations, the eventual investment into the modernisation of the building was expected to be undertaken by a new strategic partner and therefore the project works stopped in 2005.

After the government of the Slovak Republic decided to step away from the privatisation agreement due to unfulfilled privatisation conditions in September 2006, a new airport management team was appointed and its main role was to prepare a strategic plan for further development of the airport.

In accordance with this plan, investment priorities were lined up and the reconstruction and enlargement of the terminal became number one priority time-wise and capacity-wise. Since the last version of the project from 2004, the most pressing issue had become the need not only to modernise the airport but, more importantly, to enlarge the terminal building. Whilst in 2004 the airport served less than 1 million passengers, in 2006 the number rose to 2 million. The total annual capacity of the existing building was nearly filled, with the addition of the construction of annexes and various adjustments to the building, to almost 2 – 2.5 million passengers a year, not forgetting the hourly capacity, which exceeded theoretical estimates by several times in the summer months. During 2007, the original projects were re-assessed and re-drawn into a form, which included two developmental alternatives. One of these was the enlargement of the existing building in the direction of the General Aviation Terminal; the other was the construction of a completely new building on a green field site in the direction of the control tower and further along the exit road. These two alternatives for the development of the passenger terminal were submitted through the shareholding Ministry of Transport, Post and Telecommunications of the Slovak Republic to the Slovak republic government for arbitration. The latter decided in January 2008 that the first stage should only include the enlargement and reconstruction of the current building in the direction of the former bus stop and in the second stage, if the growth of traffic would require it, the development of the airport to continue in the direction of the existing control tower. (More on: www.vlada.gov.sk).

Since the valid decision of the government of Slovakia regarding the approach to further development of Bratislava airport was finalised, work on the project documentation for the first stage of the reconstruction has significantly intensified. A team of architects from AGA Letiště, s.r.o., long-serving employees and specialists at Airport Bratislava, as well as external consultants, have for 4.5 months worked on project documentation for the building permission. It was submitted on June 15, 2008 and the building permit proceedings were completed by December 12, 2008, when the airport obtained a building permit for the project.

Final look of the project:

What will the reconstruction bring? 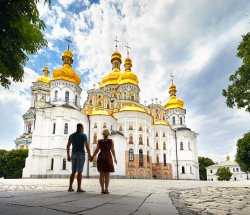