Bratislava Airport: 80% of pre-Covid network is back in S22

28. 03. 2022 – Bratislava Airport´s summer network is almost back to its pre-Covid normal. 70% of scheduled destinations will be the same as 2019, and with 6 new additions replacing some of the discontinued routes, the scheduled network will stand at 80% of 2019. 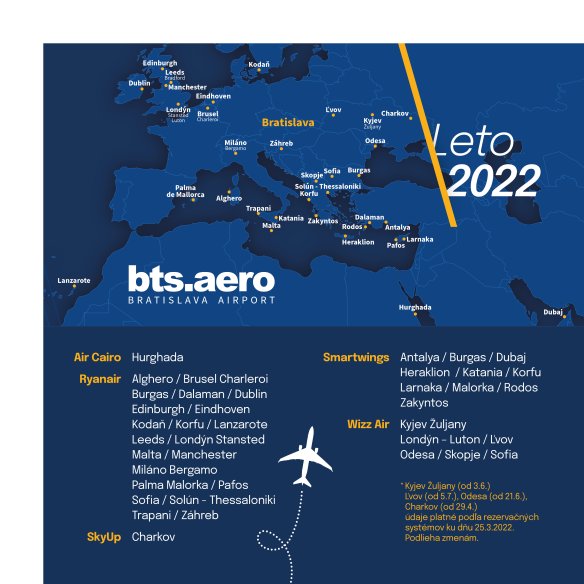 Bratislava Airport: 80% of pre-Covid network is back in S22

Bratislava Airport´s summer network is almost back to its pre-Covid normal. 70% of scheduled destinations will be the same as 2019, and with 6 new additions replacing some of the discontinued routes, the scheduled network will stand at 80% of 2019.

The desire of Slovak holiday makers to return to their favourite hot spots is sounded by both the tour operators as well as local travel agents, who confirm that first moment bookings went beyond expectations. Most of the airlines have returned with their former travel programs to Bratislava. Thanks to that, some 35 scheduled and 30 charter destinations will be available from the Slovak capital this summer.

Among the top novelties, new routes to Zagreb, Dalaman and Trapani will be launched in the last week of March. Lanzarote and Copenhagen, that were introduced by Ryanair at the end of 2021, will also serve their first summer season from Bratislava. It is still hoped, that Ukrainian airline Sky Up will be able to launch the planned route between BTS and Charkiv at some point this summer season.

UK, Denmark, Ireland, Netherlands in western Europe, as well as Italy, Spain, Croatia, Bulgaria, North Macedonia and Greece will all be connected with the Slovak capital by numerous scheduled routes. Underpinned by the ever-popular spots in Turkey, Egypt and UAE, the offer reflects the preferences of Slovak consumers.

Up to 30 more seasonal charter routes will complement the scheduled network, connecting the most favourite destinations in the Mediterranean and Africa.

Bratislava Airport handled slightly above 480-thousand passengers in 2021, which stands for only about 20% of the pre-Covid volumes. It was not possible to serve scheduled flights due to imposed restrictions for almost 6 months during the previous year. And while the pandemic situation in Slovakia improved significantly since the end of February 2022, the airport remains cautious with its expectations for 2022, namely on the incoming side. Big part of the former network was oriented on Ukraine and Russia, with 7 existing or planned routes being affected by the running conflict, a gap that will be hard to fill in short term.

During the month of March, the airport handled repatriation flights including ones to China or Morocco, for citizens returning to their homelands from Ukraine. Humanitarian and special cargo flights are also served on regular basis. The airport also plays a role of a transfer point for Ukrainian refugees arriving by road and continuing to other countries of Europe in the BTS network. 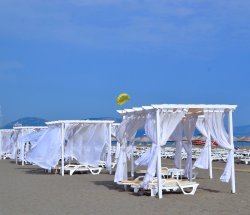